After an 8 month long process on 28 May the venerable Ethics Panel has informed me in a letter dated 24 May that they could find no solid ground to start formal action against a post published on this blog.

The IOF has submitted a complaint against this blog on 25 September 2018. The offending post raised questions regarding the IOF’s Anti-Doping activity. The Ethics Panel launched an investigation despite not being able to identify a single specific comment to investigate, and despite they knew that they had no right to investigate a journalistic activity. After 8 months they still could not find a single statement or fact in the post that required correction, or could have been used as a basis for formal action.  You may find the letter of the highly respected Ethics Panel at the end of this post.

The case is closed, forget it.

My legal adviser referred to the overall process as “funny”. He particularly enjoyed that the reputable Ethics Panel demanded “clear factual evidence” to allegations they could not even specify. He also found professionally interesting that the Ethics Panel asked the IOF for factual evidence only 7 months after the initial complaint by the IOF – and then it never revealed the details of those apparently convincing facts.

I think it was more than sad.

The interesting bit that warrants a longer post is the style of the letter of the highly respected Ethics Panel. It is a quintessential example of a witch hunt. With all respect to the authors, it is a masterpiece of condemnation without any factual substance whatsoever.

The letter of the Ethics Panel with all respect contains a number of unsubstantiated comments and underlying innuendo that calls into question my integrity and honesty with implication, but no factual evidence whatsoever. There are also numerous groundless assertions and incorrect statements that I will not address here in detail due to the lack of space, but they give an overall impression of a heavily biased approach by the venerable Ethics Panel.

Yet, because there was never a formal process, there is nothing to complain about. So all I can do is to share their letter for the edification of the general orienteering public. This is the way the highly professional IOF Ethics Panel works.

It was the style of the letter of the respected Ethics Panel that really felt familiar to me. But for a long time I could not put my finger on it. I knew that I saw this style before, but could not remember when and where. Only a month later, while watching the trailer of a very interesting new HBO miniseries, it suddenly dawned on me:

The communication of the Ethics Panel has reminded me of the style of Soviet bloc communication right after the Chernobyl incident, when it was clear that something was seriously wrong, but communist authorities desperately tried to hide it:
– A positive picture projected with no tangible substance, no hard numbers to support it;
– A blatant disregard of facts and information that may contradict the projected picture;
– A call to check facts and avoid spreading rumours, but without providing a single fact or suggesting a reliable source for information.

I am grateful to the Ethics Panel for evoking long forgotten memories of my youthful years. I was a student of Physics in Budapest in 1986. During the spring semester I was attending a nuclear lab where we were doing a series of measurements on various isotopes and in various settings, including a training reactor. On our last lab session in April there was quite a bit of gossipping that a nuclear incident happened in the Soviet Union, but there was no data. The authorities were in denial. On our first lab session early May we could measure high activity in soil samples, especially from the ones gathered from under drain pipes. In fact, the activity of some of the samples brought in from gardens was so high that by lab rules we should have kept them in special containers. Cruel jokes were spreading, like one suggesting that the May 1 demonstrators in Kiev were radiating happiness at levels never seen before. Yet, the official press communicated that everything was fine, that people should not spread negative information, and that one should check the facts, but – of course – no official facts were provided.

So let’s have a closer look why the style of the letter of the highly respected Ethics Panel reminded me of the style of communication by Soviet authorities.

In 1986 in the Soviet block all the official news projected a positive picture about the Chernobyl situation. Everything was fine. Everything was under control, as “confirmed” by the officials. Radiation levels – if mentioned at all – were “normal”. Later they were “falling”, though they never increased officially.  Needless to say, no number was ever mentioned.

The IOF Ethics Panel took a very similar approach. There are two points, #10 and #11 in their letter that make statements about the spend of the IOF “AD fund”:

“10 The IOF President responded to this on the 6th May and submitted a series of comments that effectively rebutted the various claims in the blog. This was supported with a number of factual papers that laid out statements in the IOFs accounts, Annual Reports and extracts from financial ledgers. Taken together these showed that all of the funds collected for Anti-Doping activities had been spent for that purpose and that any underspent funds in a year were reserved and taken into the following years Anti-Doping finances.”

This looks like a case of IOF transparency at its best. Not a single number stated, neither here, nor in the entire letter, despite the impression of a very meticulous work reviewing Annual Reports, extracts from financial ledgers and accounts.

It is not even specified what year the Ethics Panel refer to, because the statements are so general. But a clear assertion is made that the undisclosed numbers “effectively rebutted the various claims in the blog”. Very convincing, especially if you were properly trained to never question authorities.

The highly professional conclusion that the Ethics Panel reached says, in essence, that all the money was spent, except the part that was not, is the cornerstone of modern finance. It is refreshing to see that it was confirmed by all their work. This makes it even more regrettable that no detail of this work is shared.

This remarkable secrecy around the data that was reviewed according to the letter of the respectable Ethics Panel raises another tingling question:

What could those numbers reveal about the details of the IOF’s AD activity, if they are so secret, that the Ethics Panel did not share any one of them? Were there concerns that more numbers could trigger more inconvenient questions?

“11. The Panel noted that these statements had been subject to audit by the IOF external and independent financial and governance auditors. Neither auditor had made any comment or expressed any concern over the treatment and accounting for these funds.”

Very convincing, isn’t it? Unfortunately, it is rather vague what “these statements” refer to. Only the Annual Reports, or all the undisclosed documents?

The interesting bit is that the IOF “AD Fund” is not a “fund” in accounting terms. Hence, the auditors could not possibly make any comment or express any concern about it. The “AD Fund” is a virtual concept of monies collected under this label from athletes and organisers, and monies spent under the label of “AD testing” with no details on what those monies were spent on.

During their investigation process I provided the esteemed Ethics Panel with a range of information in addition to the original post that showed that all was not well around the information available about the IOF’s AD activity, and that raising questions was fully justified by the known pieces of information. Many of these were included in the post More questions on IOF Anti-Doping activity, including

None of the above inconvenient facts were mentioned by the highly respected Ethics Panel in their letter meant to summarise the process.

All of the above was discreetly stated as “5. Mr Talas responded by making a further set of observations on the content and information in his blog.”

Apparently, in the view of the esteemed Ethics Panel, if they do not mention it, it does not exist. This has revoked long forgotten memories about the communication of Soviet authorities.

Call to check facts with no reliable source

In 1986 every news broadcast that made any reference to nuclear radiation ended with a call to the public to stop spreading unverified rumours in communities and to check facts with authorities. As mentioned earlier, no facts on radiation levels were provided by official sources.

So the call by the highly respected Ethics Panel to check facts without providing any facts really rounded out this blast from the past:

“The Panels conclusion is that this whilst this does not quite breach the threshold for any formal action it would suggest that Mr Talas, and indeed any other future commentators, check facts before making unsubstantiated claims and aspersions against any individual covered by the IOFs Codes.”

One cannot argue with this recommendation. Checking facts is always great advice. Should have mentioned checking spelling and grammar too!

The fascinating bit is that the venerable Ethics Panel made this recommendation without being able to point out a single incorrect fact, or to specify a single claim or aspersion against any individual in the IOF. It is a remarkable feat to call somebody to check facts in a sentence with no factual basis whatsoever. Alternatively, it may give the impression that the condemnation was made independent of the findings of the investigation.

On a positive note, it has to be acknowledged that the highly professional Ethics Panel did not suggest that the IOF could be a source of reliable information, or that they may verify any information. It would have been weird knowing that the IOF has communicated inconsistent and contradictory numbers on its Anti-Doping activities. All respect to the Ethics Panel for implicitly taking into account this fact and tactfully communicating around it.

Unfortunately, this leaves us with the nagging question: where can one find reliable and verifiable information on the Anti-Doping activities of the IOF?

The following letter signifies the end of this IOF Ethics Panel investigation process. This process may be over, but I am afraid the story around the IOF’s AD activities has not ended yet. 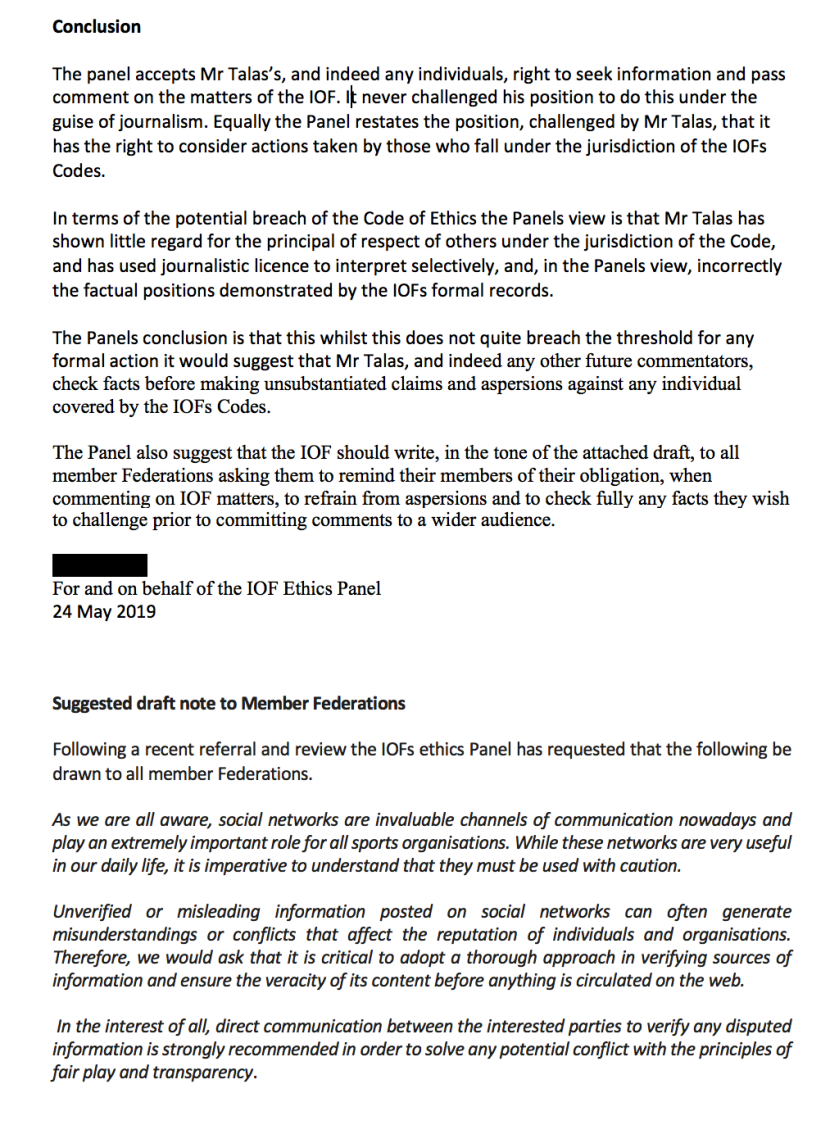