There will be no orienteering in Paris on the Olympics in 2024. No surprise there.

The interesting bit is how the IOF leadership (did not) communicate the non-delivery of a key objective of their Goal 2020, a target recommended by the IOF leadership to the General Assembly. It was a “no event”. After the failed Paris 2024 bid the CEO of the World Squash Federation resigned. Even the World Flying Disc Federation started serious soul searching.

According to my psychologist friend, the deep silence around the failure to deliver on a key objective may suggest that either the IOF leadership so strongly believed in success that now they are in complete denial, or that they did not believe at all that it was deliverable, so failure is no news.

Yet, for whatever reason, the situation made me remember the old Russian joke about Napoleon’s admiration of Pravda, the newspaper of the Soviet Communist Party.

The Olympic ambition is a core component of the IOF’s strategy as discussed before. This is nothing new. According to the research of Heinz Tschudin, the late President of the IOF, the Olympic dream has been around for 75 years. It has preceded even the foundation of the IOF.

What’s new, is that it has become the Main Goal of the IOF, and not only at a conceptual level. Not only did the Vice President show the door to IOF activists who did not believe in the Olympic Dream before a discussion on IOF strategy in 2017, but very specific targets pop up in IOF documents, like in Goal 2020 – proposed by the IOF leadership to the General Assembly in October 2018 (and duly approved by the GA, as usual). 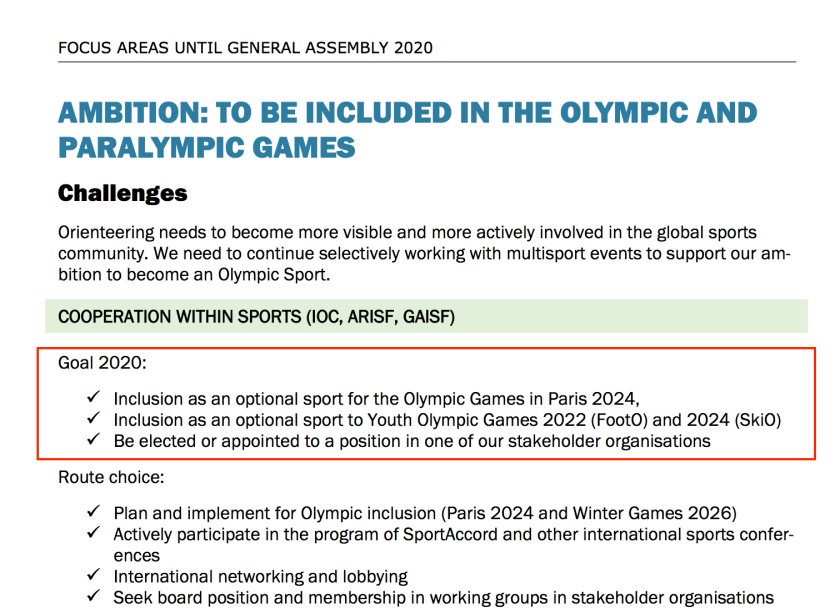