Money matters. Even in amateur sport. Even if we prefer to focus on the sport we love.

Still, in amateur sport money is often the critical resource that limits possibilities. Ambitious ideas quickly come down to earth when one tries to find funds to cover even basic expenses. Any discussion on strategy is empty fluff when money matters are not considered together with the ideas discussed.

When we look at the finances of the IOF we see a mixed picture: solid revenue streams, runaway expenses, and dwindling reserves that may threaten bankruptcy at current trends

The IOF is a lucky organization. Orienteers are a generous group of people who provide solid cash flow to for the IOF through their national federations, major event organisers and athletes, both elite and masters. There are minor variations from one year to another, but the rough picture is as follows:

Based on the published budget of the IOF, membership fees of national federations provide around €170,000, while major events (mainly from entry fees paid by athletes) provide another €260,000 to €300,000 for the IOF. We can add to this the typical grant of €20,000 from the International Olympic Committee. Altogether this gives a solid €450,000 to €490,000 income every year.

When the Council lives within its means, they could very comfortably run the business of IOF in financial aspects. 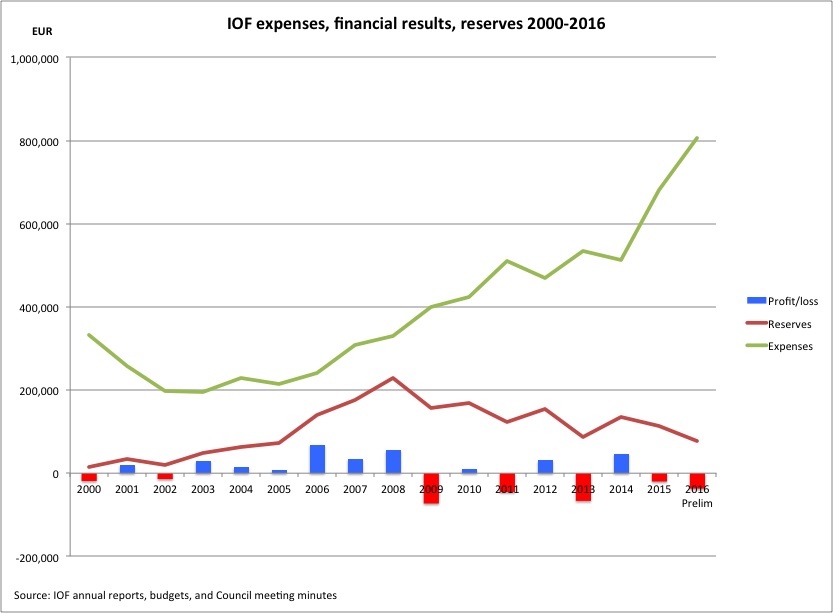 It seems that the Council is not keen to live within its means.

A growing office, overambitious IT projects, the wild goose chase of the Olympic dream, swapping volunteer work to paid services – all contributed to runaway expenses. Unfortunately, it is very difficult to analyse the details, because the financial reports published by the IOF for the General Assembly have become remarkably opaque over the past couple of years. But we will discuss that issue under a separate topic.

The current course of financials is clearly not sustainable. If this trend continues, the IOF may go bankrupt very soon. Four more years like the average of 2009-2016 (an average loss of €19,000), and no money left. Unfortunately, the increasing cost base is likely to increase volatility, so reserves may disappear even faster.

No matter how warrying this picture is,  unfortunately it becomes even uglier when we scratch the surface.

The end result turned out to be €104,000 worse than forecasted 4 months earlier. This is not small potato: it is a variation of 13% of the total budget. In 4 months!

In normal business management would have a hard time to hang on to their position after a misjudgment of this scale.

As a result, IOF reserves decreased to around €77,000, or below 9% of the total budgeted expenses of 2017. This is a dangerous level, especially because it was just demonstrated that results may swing by over €100,000 in 4 months. A relatively small variation of expenses or revenues may result in the bankruptcy of the IOF.

What could have caused a major discrepancy of this scale? In Point 12.2 of the Minutes of Council meeting 183 it was stated:

“The report showed a negative result of approximately 37 tEUR for the full year. The primary sources of the deficit were:

This makes the situation even more alarming. If “business as usual” variations may result in a €104,000 downswing in 4 months then reserves at €77,000 level left are clearly insufficient for “business as usual” operations. Strict financial control and reconsideration of the 2017 budget would be the prudent step to take. But the budget of 2017 is even larger with even larger expected revenue from sponsorship.

This looks like a runner in the night who is loosing contact with the map, but instead of slowing down, tries to push even harder to make up lost time. We all know the likely outcome…

If the result was a loss of €37,000, that is €104,000 worse than the updated 2016 budget, does it mean that IT system cost and staff cost has increased significantly more than the €64,000 cost increase already included in the updated budget? Or was the increase of sponsorship revenue targets from €50k to €150k overly ambitious? That could explain the missing €100,000. Or was the 4 month outlook presented much nicer than reality already at the time of AG presentation? We are just guessing.

All this gives a rather bad feeling. Either the leadership of the IOF is just guessing, not managing the outcome of the budget; or the picture presented in August 2016 to the General Assembly did not reflect the real situation. Either of them is bad news.

We may never learn all the details, but we have to try to understand the situation. After all, this is our international federation.