The IOF leadership performed at world class level handling the Fair Play Issue. Having spent two decades advising companies, small and large, to handle complex situations, I have to admire the use of modern management techniques by the IOF. We shall hope that on the General Assembly this week (8 and 10 July) member federations will also recognise this achievement.

I believe that this brilliance has to be documented as a case study also for the benefit of the general orienteering public. Orienteering athletes often study for a professional career or work in managerial and professional positions. They can benefit a lot from studying how the IOF leadership avoided to deal with the very difficult problem of Fair Play, while taking control of the situation.

Critics may point out that that the focus of the IOF management was not on solving the Fair Play Problem in orienteering. There was no sign of any specific investigation or even data collection to understand how widespread the problem is beyond the Unfortunate Events in China, there was no problem analysis, there were no objectives set, no success criteria or boundary conditions defined for any potential solution. There was no sign of a structured approach to understand the problem, despite the fact that the results of the broad based survey conducted by the IOF on Fair Play attitudes, and practical observations suggest that Fair Play violation is more widespread than we would like to admit.

These critics completely miss the point. These days the mainstream management focus, both for public and business administration, is not on solving problems, but on controlling communication and giving the impression that the issue is handled. The problem is swept under the carpet for the time being with the hope it will not come back while current management is in office. This was done brilliantly by the IOF leadership. 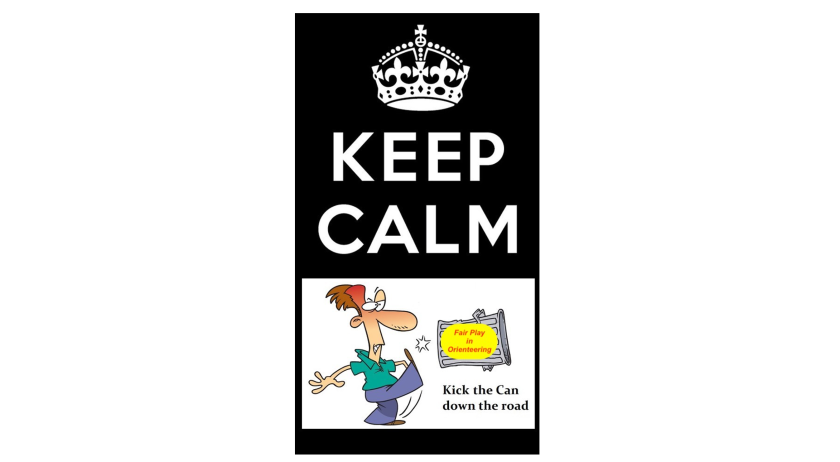 Solving complex problems is not easy, because they do not have objectively correct solutions like high-school maths problems. Every possible solution is a compromise. Evaluating and syndicating multidimensional compromises is difficult and prone to failure. It is a high effort, high risk approach – if one wants to do it well.

No wonder that kicking down the can the road – the best alternative to solving the problem – has become so popular up to the highest level of politics and the corporate world.

The IOF management deployed the best course of action one can advise these days to management keen to avoid dealing with the problem itself:

The IOF leadership has meticulously followed this textbook approach. Analysis that would have shown the links between the Fair Play Problem and IOF strategy was avoided. No meaningful debate can be launched by the public, because there is “work in progress”. No success/failure question can be raised for the lack of clear objectives and success criteria.

Below are a couple of interesting details that both budding managers may find educational, and future academics may find useful when writing up this case study as teaching material for the best schools of public and business administration.

The first and most important step in handling a crisis is to defuse the situation by gaining time. Two time tested methods can easily be deployed: committee investigation and broad based surveys.

Delegate investigation to a Committee

Initiating a committee investigation is probably the fastest and most reliable way of tackling crisis situations, especially those of ethical nature. The approach carries the notion of an investigation independent of management. In practice, every organisation have a few middle managers who have only a couple of years left before retirement. They can be trusted not to deliver anything in an investigation, yet carefully document the process in a formal report.

Some hot headed youngsters may refer to these trusted middle managers as “deadwood” to be chucked out from their organisation, but in practice these middle managers provide the best possible shield for top management in a crisis by intensively doing nothing.

A committee investigation approach allows management to avoid answering any question regarding the scandal for months while standing on a moral high ground, because they should not influence the process of investigation.  It also allows them to escape the responsibility of the investigation process, especially when there is no meaningful outcome expected.

The IOF President has submitted a referral to the IOF Ethics Panel on 31 October 2019, right after the scandalous World Cup Round in China. The Ethics Panel issued a report 4 months later (dated 2 March 2020) saying that they did not really understand the question. All they did was to read the SEA report of the event, and apparently did not ask anybody any question, not even a clarification from the IOF President on the question they did not understand. The IOF leadership acknowledged the report with no sign of trying to make any clarification.

As a result of the Ethics Panel referral nothing happened for 4 months after the scandal broke out in China.

A broad-based survey on attitudes is another surefire way of doing stuff for considerable time without the danger of a meaningful outcome. This is especially true if the survey is focused on attitudes, without specifying whether the survey is looking for “changing attitudes” that would serve as the basis to adjust the rules, or “educational gaps” where stronger enforcement of the rules needed.

The survey was launched on 24 January 2020 with an intended  publication of the answers in the first week of February, but finally the results were published only on 19 March. A deeper discussion on the survey was posted earlier on this blog.

Focus attention on the usual suspects

If the public is concerned about crime rates, especially after one committed by a  uncivilised athletes from a “new” nation, keep talking only about that specific case. The point is to highlight that the suspect represents a minority. This avoids discussing if the problems are more widespread within the community, and also strengthens group cohesion.

Seeing that the scandal of the Unfortunate Events in China was too big to be ignored, the communication of the IOF was squarely focused on Fair play and major events in new orienteering countries. The CEO of the IOF stressed that “I personally have been too naïve in believing that the strong ethical value of fair play which we have in orienteering as I know it, are automatically transmitted to new orienteering nations and across cultures.”

The focus of attention shall be kept on the usual suspects, or otherwise talking with elite athletes one may to get the impression that the Fair Play problem is endemic amongst international elite, and that the “everybody does it” type excuses to violate fair play are similar to the attitudes to drug cheats.

Management shall exercise proper self discipline to avoid reacting to discussions on Fair Play, and eventually athletes and coaches will stop bringing them up. Years of practice of looking away in situations of ethical nature shall also help. As a result, management can stay calm and  composed even when Fair Play violations happen right in front of them on World Orienteering Championships. Well, calm and composed as long as the violation is not committed by somebody from a “new” nation, i.e. not “one of us”.

After the initial delaying tactics run their course, it may get more pressing to take some sort of an action, especially when stakeholders or member organisations keep the topic alive. Less sophisticated management may see this as a threat, but for smart management this is a great opportunity to renew their time delaying effort.

A good delaying initiative is one with no specific focus or target, no success criteria, no timeline, and some very general objective, like “improve the situation”. This ensures that it cannot be neither attacked for the years to come, nor can be proven to fail its objectives.

Online educational programs, especially ones requiring just a click-through, or repeat clicks until one hits the right button are perfect. It takes time to develop them, takes time to roll them out, and nobody can really challenge them for being uneffective any time soon.

Sophisticated management can avoid facing the real issues and gain years of peace with little effort by promising an online educational tool in the future.

Last, but not least, it is very important that management avoids analysing the problem that sparked the crisis. It is counterproductive to try to understand the situations or try to identify the root causes. These may lead to conclusions management does not want to draw, but may be difficult to avoid once the analysis is done. It is better to avoid it.

Similarly, setting objectives, outlining the solution space, or even drawing any limits to potential solutions would be also counterproductive when the overarching objective is to avoid public discussion. Any step towards a possible solution could raise further inconvenient questions. No need to risk it. The focus should be on communicating that control over the situation:

One can get into more details, but hopefully the above summary shows convincingly that this Fair Play crisis situation was handled by the IOF leadership at a level one can expect only from top politicians and world class managers. Everything is under control. No meaningful discussion on the impact of the Olympic Dream or the IOF strategy on Fair Play in orienteering will take place.

We shall see if the representatives of Member federations will also express their respect and approval of this course of action on the IOF General Assembly this week.