The results of World Orienteering Day 2017 were announced today. New record, greater success. New territories involved from Antarctica to Cambodia, from Honolulu to the Isle of Man. Amazing!  –  Yes, everything is great until you scratch the surface. How come that out of the 35,000 more participants in 2017, 37,000 came from Turkey? Was there a decrease in the rest of the world?

No misunderstanding: All respect to the WOD team and the Regional and Youth Development Commission who organised it. Great work! Excellent promotional and teaching materials! Chapeau also to the Turkish organisers! In a country where orienteering is far from being a natural choice of sport for kids, it is absolutely great that they managed to spread the word and get so many schools interested.

The problem is that enthusiastic IOF communication is again trying to mask real questions around our sport. Like in IOF finances, everything is fine on the surface, but you do not have to go too deep to find serious questions despite the headline increase of WOD participation from 252,927 in 2016 to 288,007 in 2017. 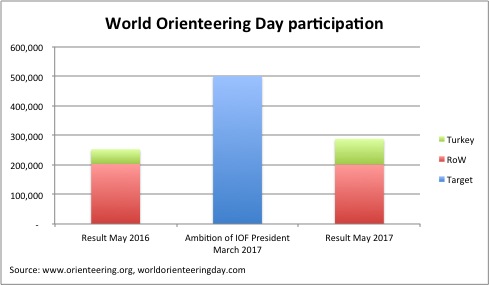 What is going on?

As usual, we face numerous questions that need to be answered, but unfortunately experience suggests that the Council prefers to plough over inconvenient questions, so we should rather ask them openly.

Was there any thought given by the Council to the unavoidable possibility that one year WOD participation will not reach record levels? After all they are responsible for the image of our sport, and falling numbers are not good message. This year Turkey saved their bacon rather unexpectedly. What would have been the IOF’s communication if Turkey would have performed at a level of the second largest participant in 2017, that is a drop in total WOD numbers by 30,000 or so.  Silence?

In general we also have to ask if we a see a pattern where the IOF leadership is regularly overestimating positive outcomes. Just look at the financial results of 2016 that were estimated by the IOF leadership at €67,000 profit in August, 4 months before year end, but ended up €104,000 lower at a loss of €37,000. Do we have to treat all IOF forecasts with a healthy dose of scepticism?

How does this reflect on the Olympic quest of the Council? Brian, IOF President at the time of WOD 2016, was clear that this event was important considering the Olympic ambitions of orienteering in the WOD newsletter. Even a support letter was arranged from Thomas Bach, President of the IOC.

Obviously, as long as the IOC does not look at orienteering as a serious candidate for the olympics, it is easy to get compliments. If they would look at it closely, they would have interesting questions, and not only about the verifiability of the numbers. After all, a self reported “world record” may easily bring smiles to the face of sports people.

How could it happen that one country supplied 30% of all participants on World Orienteering Day? Does this sport has serious growth potential only in one country, but not the rest of the World? Did orienteering reach with this approximately quarter million number a “natural” world wide saturation, at least for the time being?

While there are no hard numbers, the “world record” in orienteering is likely to give a poor comparison also to other sports with Olympic ambitions. Let’s look at the recently selected “only for Tokyo 2020” rivals: baseball/softball, karate, sport climbing, surfing, skateboarding. I would guess that there are few days of the year outside Christmas when less than 300,000 people participate in any of these five sports at a level WOD numbers were considered. So what does a “world record” of 288,000 participation say to the IOC program selection committee?

What is the right level of hype?

World Orienteering Day is a great initiative. It is great success in spreading the idea of orienteering, introducing it mainly to kids in new territories worldwide. The team did a great job that has impact well beyond the WOD. No questions about that.

The question is what is the right ambition level for our sport, and what is the right level level of hype that does not discredit a good idea, but supports the great work of the people involved for many years to come.