Just two quick impressions that may illustrate the compromises imposed by multi-sport events on orienteering.

9:00 CET on Thursday, 27 July, is the start of the Sprint Relay, our most Olympic and TV friendly format that was specifically developed to attract TV viewers from close and afar. It is as short and as dynamic as orienteering gets. It is even mixed gender – everything the International Olympic Committee and TV viewers may want.

The Olympic Channel is an internet TV service operated by the IOC. It is the “official” channel of The World Games. Its Thursday schedule looks like this: 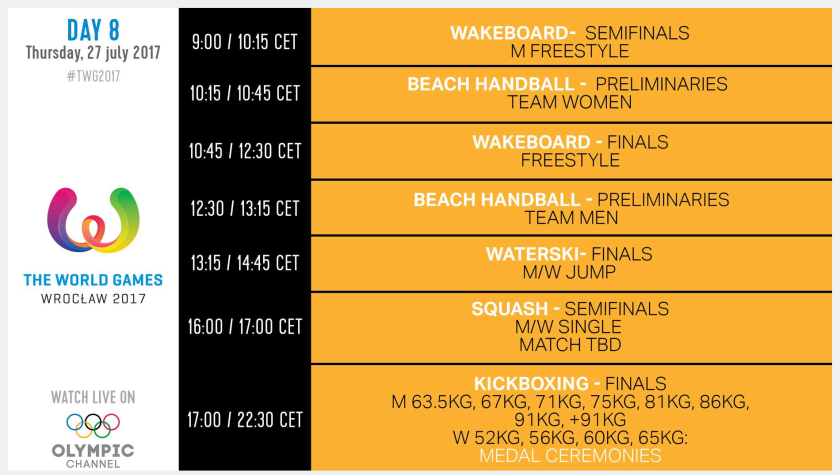 Obviously, there are always compromises when it comes to showing a multi-sport event. But let’s try to digest: wakeboard semi-finals could beat the most TV friendly of all orienteering finals in a head-to-head clash. Could this be a gentle hint that the IOC thinks that our sport does not fit the Olympic programme? Or is this a special route choice to the peaks of Mount Olympus that only the IOF leadership could spot?

The arena on New Market Square in Wroclaw was the same for sport climbing and orienteering. Sport climbing was first, so a large screen was placed ideally to show all the action. It remained for orienteering to show the TV stream, including the occasional route choice analysis using the GPS tracks on the map. Right besides the Finish – and the Start.

To make it more interesting, different athletes were entertained/distracted/informed by different pictures from the TV stream. Some saw the map, some others control locations, some others mistakes of earlier runners, or just some less relevant pictures. I am sure it has livened up those slowly ticking seconds of the last minute in the last box.

On our way to the Olympics.