With this post I would like to give the confidence to the representatives of Member Federations before the vote on the 2019-20 budget on the IOF General Assembly next weekend. I know that for people with no finance background it often looks like a daunting task to interpret financial statements and have confidence in their decision. So I would like to assure them that based on the IOF’s track record for the past 10 years, and especially for the past 2 years since the 2016 General Assembly, their vote doesn’t matter.

No matter how Members Federations vote, the IOF Leadership will spend the money the way they want, independent of the GA approved budget.

In this post I will quickly review the past, present and future of IOF finances as presented on recent General Assemblies.

The publication of the 2017 results and the forecast for the 2018 published in the Congress Binder have confirmed the remarkable feat achieved:

The IOF Leadership has missed the budget target set by themselves for 10 years in a row.

I wrote about this earlier here and here, the numbers published for the 2018 General Assembly just confirmed the expectations.

Not only the continued underperformance against their own budget targets set by themselves may come close to a Guinness Record, but the results were poor also in absolute terms.

Ignoring the approved budget looks like a recently established culture of the IOF Presidents. It started under Åke with unpublished promotions that very likely had budgetary impact, continued by Brian just informing the Council that he decided to overstep the approved budget to fund an exhibition on the SportAccord convention, and continued further by Leho who started to revise the 2017 budget already in October 2016, within two months after its approval (as discussed below).

Complete wipe out of the 2016 GA promises

Leho, as freshly elected President promised a period of plenty on the 2016 General Assembly, with highly profitable years coming starting from 2016. The result resembled the words of Chernomyrdin, the late Russian Prime Minister:

We wanted to do it better, but the outcome was the usual 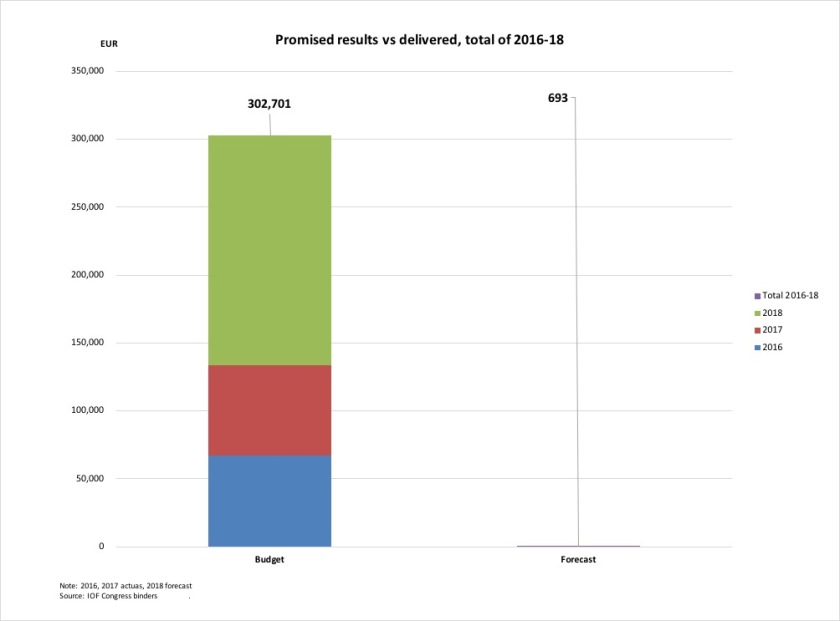 For the avoidance of doubt, the plus zero result (or 0.2% of the promised total profit of the total of three years 2016-18) was not due to spending all the money on development projects. The reason for underperformance were the complete misjudgement of revenues, and overspend on some expenses, like the World Games (€10,000 planned, €29,306 spent in 2017).

Unfortunately, this poor state of IOF financials contributes to the bad feeling that there was an incentive for the IOF leadership to spend monies collected for anti-doping activities of the IOF differently than the original intention.

I wrote earlier about the murky process that followed the 2016 General Assembly, when the 2016 year end resulted in a major loss despite major profit promised by the President in August 2016. It continued with the IOF Council starting to revise 2017 budget in October 2016, within 2 months after its approval by the General Assembly without a hint of unexpected major events that could justify the revision. These events could raise questions both around financial governance and ethics.

One would have thought that in the light of these events at least some Member Federations would get upset by the lax financial governance of the IOF, and make proposals that would try to avoid such things happening in the future. Not a sign of it amongst the proposals of Member Federations to the General Assembly: VIP concept, gender equality, new sprint format for JWOC, etc. Even the most meaningful of all proposals, the 5 Anti-Doping milestones suggested by Denmark, carefully avoids mentioning any financial aspect of the suggested steps.

Clearly, Member Federations were not disturbed by being taken for a ride on the 2016 General Assembly. At least not to the extent that they would feel the urge to stand up for their – and their members’ – rights, and demand accountable financial governance. Ostrich policy rules.

There are spreadsheets in the 2018 Congress Binder that are titled as the 2019 and 2020 budgets. Based on the practices of the IOF leadership on and since the 2016 General Assembly it makes no sense to spend time analysing these spreadsheets. As discussed above, the current leadership has a proven track record of modifying even approved budgets at will.

Overall, one gets the impression that IOF budgets do not worth the paper they are printed on.

There is also an interesting presentation on the agenda of the Pre-General Assembly Seminar on 5 October, the evening before the General Assembly. The topics are Strategic Directions, Focus Areas 2018-2022, and Long Term Financing Plan, as presented by the President and the Vice President.

Interesting to note, that while the  Congress Binder includes 10 pages of details on the Strategic Directions and the Focus Areas, there is nothing available on the Long Term Financing Plan.

That makes one wonder. Having spent decades in finance and related positions, I can assure you that even seasoned finance professionals would find it difficult to ask meaningful questions on a finance presentation that they just saw projected on a screen. Knowing that few, if any, of the General Assembly delegates are finance professionals, it leaves us with few possible options regarding the intentions of the IOF Leadership:

I have to admit that this is really not much about the IOF financials. But for the time being, this is all we can say: the past is dark, the future is unclear. The IOF remains on a knife edge, highly exposed to the slightest variation of financial fortunes.