Let’s look at external (not fee based) income attracted by the IOF. As you can see from the chart in Part 1 of this post,  this has been a minor part of the revenue, since 2002, but there are ambitious plans to grow it.

The details around external revenue streams are rather unclear, but it is very likely that they fall far short from becoming major contributors to freely spendable IOF resources.

The International Olympic Committee grant has been a standard source over the past 15 years. The IOF has to apply for it, but it appears be a reliable stream at around $25,000 (or €23,000). Interesting to note that part of it, $7500 in 2015, was earmarked to cover costs of Anti-Doping tests, as shown in the 2015 IOF Presidents Conference presentation.

Other external grants are few and far between. Recently, in 2014 and maybe part in 2015, there was a €40,000 annual grant received from the Finnish Ministry of Education for staff costs (see 24.2 in Council Minutes #169). Without that even 2014, the most successful financial year since 2008 would have ended at around breakeven (€7,302 instead of €47,302). Obviously, this source has gone with the move of the office to Sweden (for other very good reasons).

This may look like a new substantial income stream of €100,000, but it is just a pass through item balanced with a very similar expense side budgeted at €90,000. It looks like a break even game considering the extra office attention required (unlikely to be included in the expense item), and the extra risk of revenue shortfall and budget overrun.

Yet, assuming IOF ownership over TV budget was probably the best financial decision for the sport. The associated risks and uncertainties should not be borne by organisers inexperienced in this field.This is what a solid and stable international federation provide. Albeit, the IOF currently is far from being solid and stable. The dwindling financial reserves of the IOF mean that it does not have the strength it used to have 10 years ago to cover for unavoidable financial risk.

And the risks are real. Three months(!) before WOC 2017 it was noted in Council Minutes #184 there was no TV broadcast agreement with either Sweden or Norway. Norway was conspicuously not mentioned in the last news item on TV(on 22 June) on the WOC 2017 website, so there may well be a shortfall on this budget line.

These include LiveCenter/LiveOrienteering and IOF Eventor income.In essence this is as close orienteering gets to ticket sales. Under normal circumstances these and sponsorship/advertising income should provide the backbone of the income of any professional sport organisation. IOF Services still taps on money within the sport, but as opposed to Athletes License or Event fees, these are paid voluntarily.

In the IOF these were big dreams, little delivered. The above chart says it all. Huge expectations from IOF leadership that flew way above reality, as usual. Just have a look at the expectations for World Orienteering Day, and the spectacular 2016 budget flop. Detachment from reality looks like a recognisable pattern.  Jörgen Mårtensson appears to be right when he said that the IOF leadership has bad contact with the reality and the sport itself.

Unfortunately, the situation for 2017 does not look better so far. On the first ticketed event, the first FootO World Cup, there were serious payment issues. People were demanding their money back on facebook.

Let’s hope that WOC 2017 works out better, though the signs are not promising. Three days before the first final it is not even clear what costs and what are packages until you actually try to pay. So it takes a bit of guesswork and exploration, but at least you can hear the unstoppable ad for the Chinese event every time you click on a day. 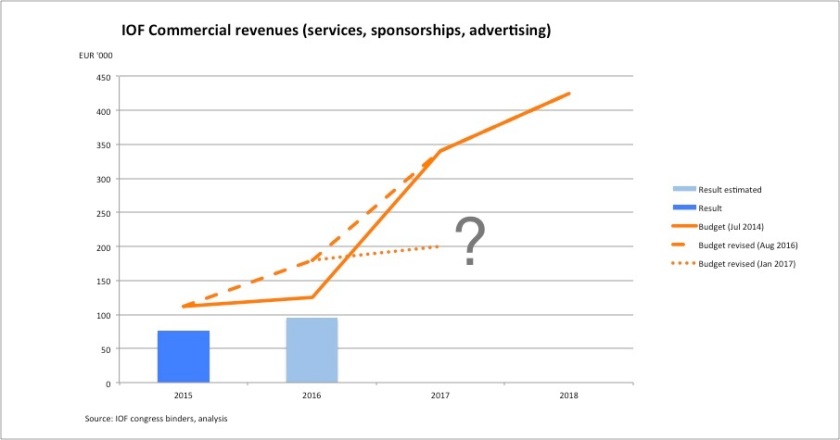 Half a year gone, the most significant IOF event is about to happen, and no sign of significant new sponsors compared to last year. Nokian Tyres and Bryzos/Siven was around also last year. BML Print is a new name, but it is a small company that is unlikely to be able to give generous  donations, no matter how much they are devoted to orienteering.

It is also an interesting question how big is the cash contribution received by the IOF.It is unclear from the financial data of IOF how much of the sponsor revenues is actual cash. In kind contributions, like World Cup jerseys, are nice to haves, but the IOF needs cash to cover its expenses. Currently Nokian appears to be the only significant cash sponsor.

The difficulty of the situation was also reflected in Council Meeting minutes #183  (Jan 2017): “The revised forecast [for 2017] showed a slightly positive result overall for 2017. 2 significant changes affected the forecast; one being a revised, lower, target for sponsorship incomes based upon the 2016 result, and a revised, and lower, cost for staff in the IOF Office”

Unfortunately, reality appears to byte even more judging by the Council Meeting minute #184 (Apr): “Sponsorship sales for the year were higher than 2016, but below the 2017 budget.” We may assume that here they talk about the already reduced budget.

So things do not look right when it comes to the IOF Leadership’s ability to raise external cash. They are not very good even estimating their capability to do it.

Next we look at the skyrocketing IOF expenses before we discuss the unfortunate,
but potentially growing risk of a bankruptcy by the IOF.